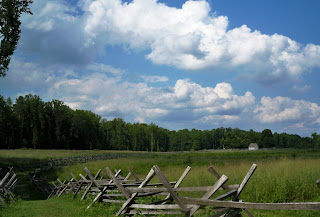 Overview: This hike covers the third of the Seven Days’ Battles. Like many of the other Peninsula Campaign battlefields, this hike is low mileage because much of the original battlefield is in the hands of private owners. One amazing aspect of this battlefield is the snake rail fences and the mixture of mature forest and open fields. Some of my favorite battlefield pictures of my brother and I have been taken at Gaines Mill.

On June 27th, 1862, Gen. Robert E. Lee launched the largest Confederate attack of the entire war to push the Union army away from the Confederate capital, Richmond. 57,000 Confederates assaulted the right flank of Union Maj. Gen. George B. McClellan’s position located in front of the Chickahominy River. Union Brig. Gen. Fitz John Porter’s Fifth Corps had taking the high ground above Boatswain’s Creek after the Battle of Beaver Dam Creek near Mechanicsville. The Union line along the plateau known a Turkey Hill consisted of 27,000 men and 96 pieces of artillery. Poorly coordinated Confederate attacks allowed for Porter’s Corps to escape across Chickahominy River before being completely destroyed. Besides Shiloh, this was the bloodiest battle in the early years of the war. 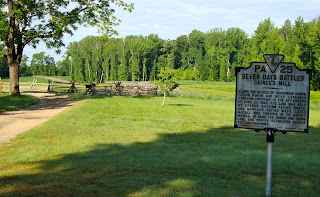 Gaines Mill Battlefield Hike: Start your hike at the parking lot and turn right on the trail towards Boatswain’s Creek. It was through this area where Union Brig. Gen. John H. Martindale’s Brigade was positioned along the high ground above Boatswain’s Creek. Union soldiers constructed multiple breastworks along the slope and waited until Confederate Maj. Gen A. P. Hill’s Light Division began his attack off to your right.

Continue on the trail as it veers left. Through this area, it is easily to see how the swampy waters of Boatswain’s Creek helped to slow down the Confederates as they approached the Union lines. The high ground on the other side of the creek was open at the time of the battle and was planted with wheat. This quarter of a mile clearing allowed artillery and small arms fire to decimate the Confederate ranks as they approached Boatswain’s Creek.

Continue on the hiking trail until it veers towards the high ground on the left. During the afternoon, uncoordinated Confederate attacks were repulsed by Porter’s defensive position. As the sun began to set, General Lee called for a final push on the Federal’s right flank by Confederate Maj. Gen. James Longstreet and Brig. Gen. W. H. C. Whiting’s Divisions. General Lee personally asked Confederate Brig. Gen. John B. Hood to lead the final attack. General Lee asked, “This must be done. Can you break this line?” Hood’s replied, “I will try.”

Hood told his men not to fire until they crossed the creek and the attack was launched as the daylight began to fade. The men wildly crossed the creek in front of you and began firing at the Federal position along the high ground, causing the Union soldiers to race back towards Turkey Hill. All along the right flank of the Union line, the Confederates began to make headway as more Union soldiers began to make their way towards the Chickahominy River. 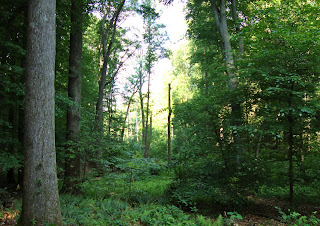 Continue on the trail until as it turns towards the right. As you walk, look for the preserved Union rifle pits along the high ground that the Confederates had to clear as they made their way towards the Union artillery on the plateau. It was across the creek in this area where Longstreet’s Division attacked the Union line and Brig. Gen. George E. Pickett was hit in the shoulder by a bullet and knocked off his horse. Later, his brigade would help to break through the Union line with Brig. Gen. Cadmus M. Wilcox’s Brigade. 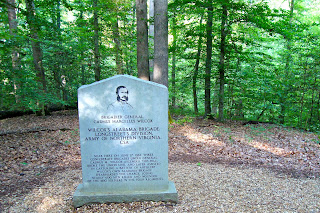 Continue on the trail until you emerge on the open plateau and the snake rail fence. Turn right on the hiking trail and follow it until it ends. As the Confederates closed in on the Union artillery, which was firing double charge of canister at 35 yards, Union Brig. Gen. Philip St. George ordered a futile cavalry charge to save the Federal guns. The Union cavalry charge was easily repulsed and did little to stop the Confederates as they captured 19 Union artillery pieces. 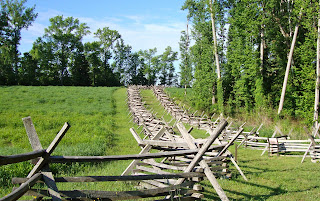 Retrace your steps and follow the trail back towards the Watts house. It amazing to imagine 57,000 Confederates attacking up and down this line and the carnage that would have ensued along this open ground. The attack was four times larger that Pickett’s charge at Gettysburg. Unfortunately for Lee, darkness came and the Confederate assault began to stall, allowing Porter’s Corps to barely escape over the Chickahominy River bridges.

Before the battle, the Watt house was turn into a Union headquarters, forcing widow Sarah Watt to leave. After the battle, Watt found her house in complete ruin. She wrote that, “The walls and roof were torn by shot and shell, the weatherboarding honeycombed by Minie balls, and every pane of glass shattered.” The inside of the house was not left undamaged either. The home was soon turned into a field hospital after the battle. Watt wrote, “Now, from garret to cellar, there was scarcely a space of flooring as large as a man’s hand that did not bear the dark purple stain of blood.” 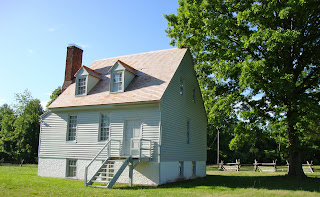 The opportunity for Robert E. Lee to finish off the McClellan’s army was missed as men from both sides lay dying in the fields as darkness took hold over the battlefield. The fighting would rage on for four more days until the Confederate defeat at Malvern Hill. But for Lee, Richmond had been saved, but the war was about to move into its bloodiest phase. Follow the trail back to the parking lot and to your car. This concludes the Gaines Mill Battlefield Hike.
Posted by Brandon Nels at 6:22 PM